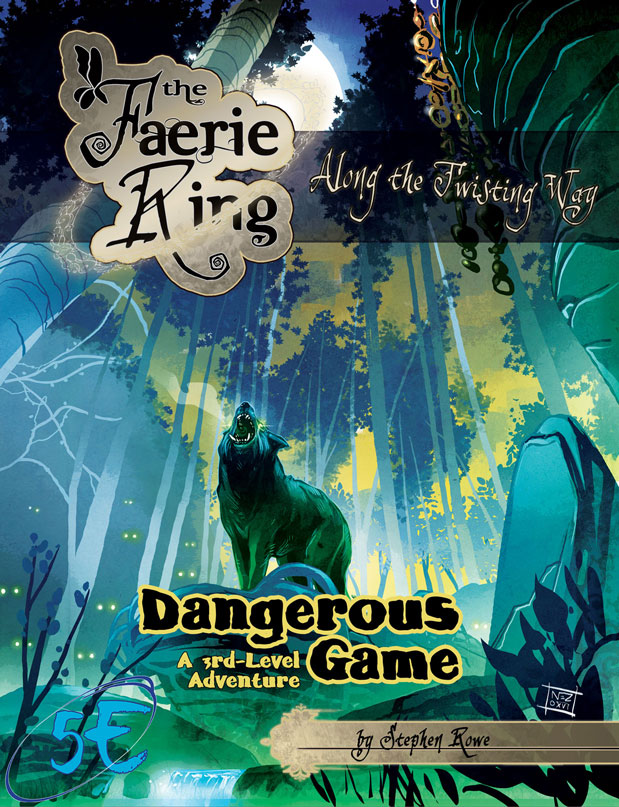 A 3rd-Level Adventure by Stephen Rowe for The Faerie Ring (5E).

A tribe of fir bolg believes they’ve found a possible cure for the Morrigan’s curse, which transforms pregnant fir bolg into hounds by the time they give birth. The women might call upon the power of the Wild Hunt to trade lives for lives fairly taken, or they may seek a loophole whispered by a mysterious oracle. The huntresses must stalk, with wit and weapon, mortals armed with the same. Should they triumph, the tribe believes they might master the pending transition. However, in so doing, they risk death with no child to show for the sacrifice. This theory remains untested until a group of wayward settlers wanders into their territory.

Dangerous Game is a stand-alone adventure for the world’s oldest fantasy roleplaying game for 4–5 player characters of 3rd level. The PCs become the prey to sympathetic predators while powerful fey forces move in the background. Can they turn the tables on their pursuers, or are their lives forfeit to the Wild Hunt?